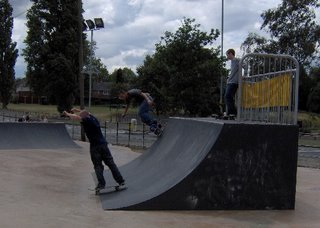 As a member of the Acocks Green Ward Advisory Board, I was invited along to the opening of the new Fox Hollies Skate Park this weekend. This has been funded in part by Neighbourhood Renewal Fund money (thanks to the Labour Government) awarded through the Ward Advisory Board and Ward Committee, but largely thanks to a big donation from Sport England.

This is a much-needed facility for young people in the area and allied with the youth services pod across the road will be a major resource for a part of the community that hasn't had much positive focus over the years. We only seem to think of young people in terms of crime and anti-social behaviour - often forgetting that we were young once, although it does seem a lifetime away for me and I think I'm the youngest on the Ward Advisory Board.

Despite the many positives, there are problems. There have been reports of vandalism, drug-taking and other anti-social behaviour in the vicinity - not all of them down to the young users of the park, if truth be told. Part of this is unsurprising - if you give young people a central point to gather, you shouldn't be surprised if they then gather there and some disruptive behaviour is to be expected. That said, it needs to be policed. Some of this will come from the youth workers opposite and hopefully from the community that uses the site, but support will be needed from the Kings Heath police OCU - who haven't been excelling themselves in this particular area lately, thanks largely to the fact that this area is at the extreme end of their patch and they have been known to pass the buck to Solihull, who pass it back again. I've had a number of complaints from local residents about the lack of response on a number of issues - a complete contrast to the support I've had from the team working out of Acocks Green police station.

I've offered to assist and will ask our Labour MP, Roger Godsiff, to get in touch with the OCU commander and see if we can exert any pressure on the police that way. It would be a terrible shame for this great facility to be marred by low-level crime and misbehaviour.
Posted by John O'Shea at 7:21 pm No comments: Links to this post