Tuesday saw Cllr Majid Mahmood and myself visiting Pype Hayes Golf Club to see how the My Time contract is performing one year into operation.

I have to confess that golf is not a sport that has ever inspired me, but I was impressed by the potential that this operational model offers the city.

The club house has just been rebuilt from the ground up after a fire prior to the contract starting and represents what the providers want to offer more widely. The ground floor is open-plan, but can have areas closed off to create rooms for meetings or private hire. It includes the golf shop and a bar and restaurant, which looks out onto a large decked area and the 9th and 18th greens. Membership is priced competitively within the market and they consciously want to attract a wider, younger group - dress codes have been scrapped and membership is made easy so as to attract those put off by other, rather more old-fashioned clubs.

On the upper floor is an air-conditioned, light and airy gym, which is largely unstaffed, allowing the costs to be kept exceptionally competitive - a day pass costs £5 and monthly membership can be had from about £25 a month. For that, you get access to 60 of the latest machines - many of which have Freeview, will connect with smartphone apps to provide individual training routines and will shortly have internet access as well. The machines are so smart that if they break down, they notify the supplier electronically and an engineer is tasked to visit within 24 hours.

My Time are a social enterprise - they do make a profit, but it is all reinvested in the business, so that they have no debt to carry. They started out running a number of golf courses in the south east and this was their biggest expansion, running seven council courses in Birmingham. From being a loss-making and under-invested council service, which was massively subsidised, this will generate income for the city council, increase community involvement and also deliver the service that golfers want. They've got a fearsomely long contract period - 25 years with an option for a further 25 years - but the initial signs look extremely promising.
Posted by John O'Shea at 8:30 am No comments: Links to this post

Another win for Birmingham 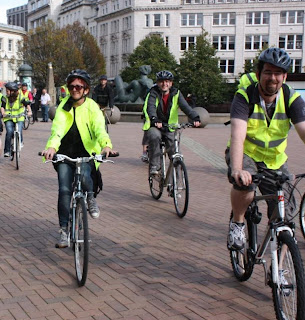 Earlier in the year, as Birmingham proudly hosted the Cycle City Expo, Andrew Stunell, a Lib Dem MP, accidentally leaked on the internet (and then withdrew it) that Manchester had won their bid for money to develop further their cycling potential. The assumption that followed was that there was no way that Birmingham would win, given the size of Manchester's bid. This view gained a lot of traction - even I bought in to it - but Monday saw the announcement that we were all wrong. Yet again, Birmingham has won a competitive bid and gained the largest chunk of the £62m won by any single local authority (the Manchester bid covers the Greater Manchester area and Leeds is actually a West Yorkshire bid including work across Leeds and Bradford). We've secured £17m of funding - to go with a further £7m of city council money - to make some major improvements for cyclists in Birmingham.
Although this is going to be used to create 70 miles of new cycling routes and improve the 60 miles that we already have, this is only a start. As was pointed out during the Changing Gear scrutiny inquiry, the infrastructure in the Netherlands has taken four decades of work to get to the level that it is now - it has taken consistent investment and political will, backed by popular pressure, to get to their standard of provision. As a city, we're a long way behind this curve and this money is only a contribution to what we need to do to revolutionise cycling in our city.

This is a long term investment for the city - changing how we travel and making sure that we can use the most appropriate method for the journey will make our city cleaner, it will improve the air quality and have significant health benefits well beyond the value of the investment. It makes financial and health sense to do this.

While I'm delighted to see this boost for cycling in Birmingham, a tweeter (@roadccdave - Dave Atkinson) put this money into the context that we normally see for transport projects. The realignment of the A45 Coventry Road to allow the extension to the airport runway has cost £30m by itself. The Cycle Expo saw Andrew Gilligan, Boris' cycling tsar, visit Birmingham and tell us that he has the same amount to spend on a single project on the Embankment as we have won from the government for the whole city. I'm not being ungrateful - but let's put this into context.

Of course, we now have to deliver on the promise. That's the next challenge.

By the way - SkyRide Birmingham returns to the city on Sunday September 15. Sign yourself up....
Posted by John O'Shea at 8:30 am No comments: Links to this post