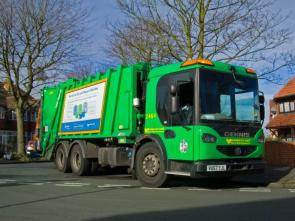 As usual at this time, the collection rounds for the binmen are particularly heavy - the Christmas and Boxing Day holidays added an extra week's collection to those who normally have their collections on Wednesday or Thursday and that goes on top of the extra waste as a result of the holiday.

Those are the only two bank holidays that we don't collect rubbish as normal and it usually takes a couple of weeks to catch up. Last year was worse because of the snow and ice, but it looks as though we might get away with just the wind and rain at the moment.

The crews are doing all they can to minimise the amount of rubbish not collected each day, but the sheer volume makes it difficult. Some parts of Acocks Green are about a day behind on collections, although there may be pockets where it is a little worse. Crews are working this weekend to clear the backlogs and they will prioritise black bag collections over the recyclables - but all will be cleared.

If there are any patches that are more than a day late, let me know and I'll make sure it gets cleared.
Posted by John O'Shea at 9:00 am No comments: Links to this post 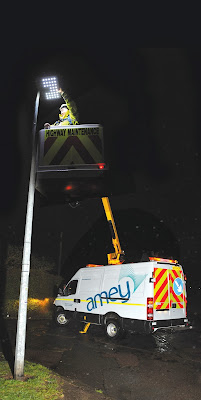 The LED lighting revolution returns to Acocks Green in 2014. It took a serious fight to get the whole of Woodcock Lane relit last year, as Amey initially denied that the rail bridge was part of the highway. It took weeks of nagging, site visits and eventually having the archives exhumed to prove that it was indeed part of the highway and should be properly lit.

The new lighting columns are placed towards the back of the pavement so that they cast light onto the footpath and the road itself. The light is directed downwards and not into gardens or houses and the positioning also reduces the number of lights damaged through collisions. The lights are also much cheaper to run - halving the city council's streetlighting electricity bill and the carbon emissions. As the lighting is more effective than existing lamps, the

It may take several weeks to complete and there may be a delay between the columns being installed, having them connected to the supply and then the old columns removed.

This work is reasonably non-intrusive - but it will not be possible to park by columns that are being installed or removed and there will be trenches and holes dug to allow cables to be installed. Any open trenches will be barriered off in the meantime.

Part of the following is extracted from a leaflet put together by the England Illegal Money Lending Team and the Birmingham Financial Inclusion partnership and shamelessly stolen from Cllr John Cotton's website. Other bits have been added from my own resources.

I hope that this helps.

HomeHeat Helpline
The HomeHeat helpline advises people worried about paying their energy bills and keeping warm during the winter. It gives advice to households in urgent need of heating help and advice. It is free to call and is open 9am to 6pm Monday to Friday.
Web address - www.homeheathelpline.org.uk
Telephone – 0800 33 66 99

Warm Homes Discount
For more information on this, see this earlier post.

Water
Severn Trent Water offer a range of tariffs and services which include flexible payment options, Water Direct, the Severn Trent Trust Fund, the Water Sure scheme, a Single Occupier Assessed Charge and Access services. What may also reduce your bills is their Free Meter Option Scheme and our Water
Efficiency products.
Web address - www.stwater.co.uk
Severn Trent Water on 08457 500 500

Healthy eating
Birmingham’s markets are jam packed with fresh produce, lots of choice and bargains. Six days a week, 140 stallholders are up with the lark to offer their great deals. The Indoor Market is famous for its selection of fresh meats, fish and produce, giving supermarkets a run for their money for choice, price and atmosphere. And whether you’re running up a ball gown or saying  ‘curtains’ to ready-made home furnishings, nowhere beats the Rag Market.Opening times:
• Bull Ring Open Market - 9am to 5pm every Tuesday to Saturday
• Bull Ring Indoor Market - 9am to 5.30pm every Monday to Saturday
• Rag Market - Tuesday, Thursday, Friday and Saturday 9am - 5pm
Check out www.agirlcalledjack.com/tag/recipes/
This blog has recipe ideas for everyone on a budget, written by someone who was until recently living on that very same budget. She's been there and wants to show that being on a budget doesn't mean that you can't have tasty, varied food. Every menu is carefully and realistically priced by Jack from her local shops.

Local Welfare Provision from Birmingham City Council
The Local Welfare Provision scheme is discretionary and seeks to assist vulnerable people who are in short term crisis, to meet their needs for food and essential items or to assist them to maintain their independence
within the community. Before a grant is awarded the applicant will usually be required to demonstrate that their need cannot be met by another source. This may mean asking for help directly from other agencies or
other parts of the council before continuing with an application.
Web address - www.birmingham.gov.uk/lwp

Borrowing Money
Many households are feeling the impact on household finances from spiralling debt caused by high interest and fees and are struggling to access bank services and affordable credit. Birmingham Fair Money has
gathered the not for profit, responsible lenders serving Birmingham under one web site. For loans and savings check out their web site for further information.
Web address - www.birminghamfairmoney.org.uk

If you have already borrowed money and are struggling to repay help can be obtained from the debt section. If you are worried that you may have borrowed from a loan shark you can contact the England Illegal
Money Lending Team. A loan shark is someone who lends money without the appropriate licence issued by the Office of Fair Trading. Loan sharks rarely, give any paperwork and if payments are missed they often use intimidation and violence to get money. The England Illegal Money Lending Team can be contacted 24 hours a day, seven days a week.
Telephone - 0300 555 2222
e-mail: reportaloanshark@stoploansharks.gov.uk
or by text to: loan shark + your message to 60003

Budgeting
The Pay Ahead Stay Ahead Scheme is aimed at 16-24 year olds. They can offer budgeting advice workshops and one to one support for those living in Birmingham. To sign up call or check out their web page. Their website also has an online directory offering help and advice to everyone on issues such as food banks, employment and benefits.
Telephone 0800 160 1990
Web address: www.payaheadstayahead.com

Birmingham Trading Standards
Each year Birmingham Trading Standards Service and the Citizens Advice consumer service receive requests for advice and assistance from members of the public concerning repairs carried out to their homes. Unscrupulous traders can deliberately take advantage of the most vulnerable members of our society. They can charge extortionate prices for very little. We take the job of tackling rogue traders very seriously. Our message is “Think Twice” before you open the door.
For more information visit:
Web address - http://www.noroguetradershere.com/
Telephone 0800 233 5000

The Samaritans
It doesn’t matter who you are, how you feel, or what has happened.
If you feel that things are getting to you, get in touch.
Tel: 08457 90 90 90
E-mail: jo@samaritans.org

Local Advice in and around Acocks Green
These are all part funded through the Community Chest from Acocks Green in order that they provide support to residents within the ward.

Birmingham TUC Centre for the Unemployed
They offer help to people who are either unemployed or on low wages and have a drop in session between 10am and 12 noon on Mondays, Tuesdays, Wednesdays and Fridays.
Address: 448 Stratford Road, Birmingham B11 4AE
Telephone 0121 771 0871

Birmingham Citizens Advice Bureau
They offer free independent and confidential advice. This is on a first-come, first-served basis and they are open Monday and Tuesday between 9:30am and 4pm; and Thursday 10am to 4pm
Address: 744-746 Warwick Road, Tyseley, B11 2HG

Shelter
They provide quick online advice on housing issues through this website.
Web address: http://england.shelter.org.uk/get_advice
Posted by John O'Shea at 8:30 am No comments: Links to this post

Planning Applications to the 21 December 2013

A few to catch up on before Christmas:

2013/09187/PA - Land at the junction of Reddings Lane/Olton Boulevard West, Eaton Electrical
Ltd, Tyseley, B11 3EZVariation of condition number 7 attached to planning approval 2010/01029/PA to amend the wording to
read 'No development, save for works of demolition and site clearance, shall take place until details of the
number, design, location and post development monitoring arrangements of (bird nesting boxes/bat boxes/bricks/tubes) to be provided as part of the development has been submitted to and approved in
writing by the Local Planning Authority. The bird/bat boxes shall be installed in accordance with the approved details and thereafter maintained'

The wording currently reads:
No development shall take place until details of the number, design, location and post-development
monitoring arrangements of (bird nesting boxes/bat boxes/bricks/tubes) to be provided as part of the
development, has been submitted to and approved in writing by the Local Planning Authority. The
bird/bat boxes shall be installed in accordance with the approved details and thereafter maintained.
Reason: To enhance the nature conservation interest of the site in accordance with Paragraphs 3.37-
3.40 of the Birmingham UDP 2005, PPS9 and the Nature Conservation Strategy for Birmingham SPG.

This would seem to allow clearance to clear the site BEFORE the nature conservation measures have been installed.

If you have any comments, you can submit them online - feel free to pass your comments on to me.
Posted by John O'Shea at 8:30 am No comments: Links to this post