You can find out more details of each application on the council website here.
Posted by John O'Shea at 11:30 am No comments: Links to this post

On the campaign trail 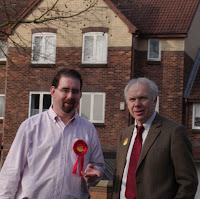 Last week, we took advantage of the good weather to get out and about and knock on some doors on the Stockfield estate. It was particularly good to have the excellent Steve Bassam (@stevethequip on Twitter), leader of the Labour Lords, along to lend a hand and he was certainly quick to dash up and down the paths, shaking hands and digging out the potential voters.

As is common, we found voters furious at the Lib Dems for their post-election behaviour - 'Never again' is a very common refrain.

We'll be out and about across the ward in the run up to election day, so do stop and say hello, even if we aren't knocking on your door.
Posted by John O'Shea at 6:00 pm No comments: Links to this post 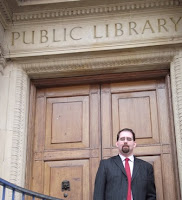 Let's be clear about the situation with Acocks Green Library. It is a key community facility and all those of us who live here are lucky to have such a well-used building - my family have always used it.

The Liberal Democrat/Conservative council in Birmingham have developed a 'revised operating model' for libraries in Birmingham that would see key sites like Acocks Green and South Yardley allocated enough money to open for 40 hours a week (usually 4 weekdays and a Saturday, with one late night). That would be reduction from the current 5 weekdays and Saturday model in Acocks Green, which requires 50 hours to service.

At last week's Constituency Committee, the Liberal Democrats forced through a decision to use Community Chest funding to pay for the additional ten hours required to make up the difference - but only for six months. Labour wanted this decision taken locally at the next ward committee meeting in May - just as the Liberal Democrats did in Sheldon this month, with a chance to consult with you, the electorate.

FACT: As things stand at the moment, in autumn 2012, Acocks Green library will face a cut of ten hours.

This coming year, Yardley constituency faces other cuts of roughly £1 million, plus £312,000 of cuts that the Liberal Democrats failed to make this year, plus repaying an end of year overspend - currently forecast to be £454,000 - and also overspend from 2010-11, also under Liberal Democrat control.

They failed to identify any areas of spending that will face the axe after the elections, despite repeated attempts by me to get them to tell the electorate in advance where the cuts would be made. They don't want us to know - they just want to kick the can down the road past the elections.

All this comes against the background of unfair cuts imposed upon Birmingham by the Tories and their Liberal Democrat cronies - each of us faces cuts of £164 per person. Wokingham faces cuts of just £20 per person. The West Midlands are cutting police officers - Surrey are hiring more. Is that fair?

Why won't the Liberal Democrats stand up for Birmingham?

Labour promise to do so. Within days of winning power in Birmingham, Labour will ask all the political parties to support a demand for Birmingham's fair share.
Posted by John O'Shea at 7:30 am No comments: Links to this post

With a hat tip to Neil Elkes, here's a link to the booklet shortly to be landing on doorsteps across Birmingham.
Posted by John O'Shea at 4:59 pm No comments: Links to this post