Tonight, we've got the final Constituency Committee before the elections and money figures large on the agenda. The main items are:
At the end of December, the constituency was expecting to overspend by a whopping £454,000 this year and the only steps suggested to minimise that are that the officers and chair will stringently control budget expenditure and carefully manage vacancies, temporary staff and redeployment. Which you would rather think would be standard practice, rather than a last minute panic measure. Added to that is the constituency's failure to achieve £312,000 in savings, with no measures in place to achieve those figures. Part of the £1 million savings has already been achieved through a series of one-off measures - using up unspent Working Neighbourhoods Fund and deferring payments of deficits built up in earlier years are one-off methods that were tried at city level as well.

Should be an interesting meeting.
Posted by John O'Shea at 5:30 pm No comments: Links to this post 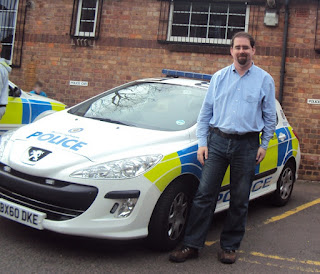 As always, good to see around our local police station. The Fire Service from Hay Mills were there, along with the traffic bikes, a van from the Operational Support Unit and a dog handler. You could even have a go on the laser speed gun, tracking the cars moving along Yardley Road - fortunately, all within the limit.

The cuts continue to bite, however, as the dog section will lose 14% of its manpower and the traffic department has already lost 35% of the assigned officers.
Posted by John O'Shea at 8:30 am No comments: Links to this post

These would be three new houses forming a small terrace that would actually front onto Marie Drive, as they would be built on the end of the gardens of the above three properties. Each house is three bedroomed, with an en-suite bedroom and a study in the roofspace. Although these are being built on the gardens of the Shirley Road houses, they will have independent access to Marie Drive.

If you have any comments, you can submit them online - feel free to pass your comments on to me.
Posted by John O'Shea at 6:00 pm No comments: Links to this post