Items on the agenda will be

This is a meeting open to the public - although they will unusually be excluded for the duration of the private agenda item (until approximately 11:15am).

Not a bad couple of days

Not a bad day all round - I had a really good afternoon at the Council House with the young people from the House of Play and Education who were on a guided tour of the building and asked some key questions. Even there, wheelie bins came up for discussion.

I had a quick phone call from the police about some offensive graffiti on Starcross Road, which they had reported and been promised removal by Amey by September 4th. Knowing which buttons to press, I had that graffiti removed within an hour.

And now, after raising a bit of grief over the delays from the contractor on moving forward the repairs to Acocks Green Library roof, it looks as though we might be getting closer. We've got a price which is now within the budget and are moving towards a pre-start meeting. No dates yet, but we look to be more or less on the way now!

Add to that yesterday's highly effective meeting with CENTRO, NXWM and the LSTF design team and it has been a rather productive couple of days.

Still time for the week to go wrong, though.
Posted by John O'Shea at 10:03 pm No comments: Links to this post 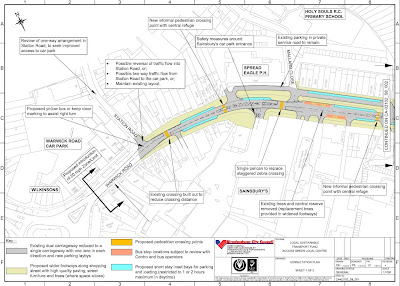 The initial plans have been put out to consultation for the major improvements to the Warwick Road through Acocks Green as part of the Local Sustainable Transport Funding scheme. We're going to see about £1.7 million spent on this part of the scheme alone and it represents years of work by members of the community and a successful bid to a government fund for this and several other schemes around the city. 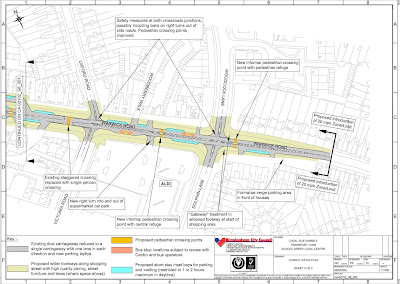 There are more extensive plans for the whole of the Warwick Road from the Stratford Road junction down through to Solihull. Over the next couple of weeks, we'll also see the plans to rework the Stockfield Road/Warwick Road/Fox Hollies Road junction, which has not proved effective since the last remodelling.

The pictures to the left show the main area that we're talking about - from Station Road up to just past Woodcock Lane. The existing dual carriageway will be reduced to a single carriageway - with the central reservation removed (the mature trees in the middle will be felled, but more trees will replace them along the roadside) and pavements widened. This will have the effect of removing the bottlenecks at either end of the dual carriageway and smoothing out traffic flow along the road length. The intent is to make Acocks Green a more attractive place to shop and to open a shop - we want to capture the trade that just passes through our village and finds it too hard to stop. To that end, there will be more on street parking and the Station Road car park (actually correctly termed the Warwick Road car park, according to the council) needs to have improved access.

As you know, we're currently updating the street furniture around the Green and this theme will be continued along into the eastern end of the shopping area. The stretch will also be relit at the same time as this programme is carried out - Amey are aware of this and have also held off work to the pavements pending this work, following my intervention.

Pedestrians should find it a nicer place to be, with wider pavements and easier crossing points. In particular, the residents of Woodcock Lane will find the shopping centre more open to them, as they will have new refuges to allow them to cross safely over the new single carriageway, rather than being unable to dash across the dual carriageway.

I hope that the principles of the project will get widespread support, although the details still require work. These are the initial plans and that there have already been some changes proposed following site meetings involving the design team, CENTRO, NXWM, Cllr Stacey and myself.

Proposals to ban right turns out of Woodcock Lane and Oxford Road are set to be dropped. We objected to this as the traffic volume is relatively low and it would make it difficult for residents to turn into the city (Oxford Road residents would have to go north and either out towards the Coventry Road or turn down Dudley Park Road and make a complete turn of the Green to join the Warwick Road city bound. There is relatively little traffic coming out of Woodcock Lane, as there is no southbound access across the rail bridge for vehicles.

Relocating the bus stop which serves Iceland. This was proposed to be relocated to the east outside the old convent building, now part of Archbishop Ilsley. We objected to this as it would mean a significant gap between bus stops (the next city-bound is down in the Green) and would force passengers with heavy shopping to drag it up the hill and over the Sainsbury's driveways. The stop will be retained roughly where it is now, but will be extended to take two buses and there will be a taxi drop-off and pickup point in front, instead of additional car parking spaces on that side of the carriageway. This supports current usage of that stretch of road.

Relocating the bus stop in front of the Spread Eagle. The plans see this moving east to a spot roughly in front of the NatWest bank. Again, this would mean a large gap between the earlier stop outside Wilkinsons, especially as the stop has already been relocated east once in the past few years. The stop will again be retained where it is, but marked out for two buses. On both of these, we've also insisted on the continued use of the Kassel kerb to help passengers board buses safely.

There is another item for consideration - what we do with Station Road. Part of this is to improve access to the Warwick Road car park, off Station Road and to do this, a scheme is being considered to change the flow along Station Road, which is currently one-way for the entire length from Dudley Park Road down to Warwick Road. The current suggestion is to make Station Road two-way from Warwick Road to the car park and maintain the one-way flow as it is now along the remaining length. This is, however, up for discussion and views of users and residents are being sought to find the best possible answer.

Other issues - I think the scheme needs more to support cycling in Acocks Green and I'd also like to see the 20mph limit extended onto the residential roads coming off the Warwick Road. It seems rather inconsistent that under the current proposal, drivers are limited to 20mph through the shopping area, but if they turn down Victoria Road or Mallard Close, they can accelerate to 30mph past the schools.

Cllr Stacey and I have raised our concerns about the poor quality of the proposed consultation process, which was originally due to finish at the end of this month. As a result, the consultation will now close on the 16th August and we have pushed the design team to stage two public events at Acocks Green Library on Thursday 8 August and Saturday 10 August. Copies of the plans will be available there in advance for you to look at and Ian Jeffries has very kindly offered space in his shop window to display them as well.

If you want to have a look at them now, you can go to the BeHeard website, view the plans and submit your comments. Your views and opinions are vital. This is one of the biggest investments in Acocks Green in decades and we want to get it right. So, let's have your opinions. If you want to send them to me as well, I'd be really interested to see thoughts and comments.

We are up against the clock, however. The rules of the government grant (which can only be spent on these projects) say that the work has to be completed by the middle of 2015, so work is likely to start during the spring and early summer of 2014.

Whether you write, email, call or pop along to one of the events - make sure your voice is heard!
Posted by John O'Shea at 8:00 am No comments: Links to this post

Summer Activities in Yardley - Bus Plus

Part funded through the Acocks Green Community Chest, this a range of free or low cost activities for young people across the district. 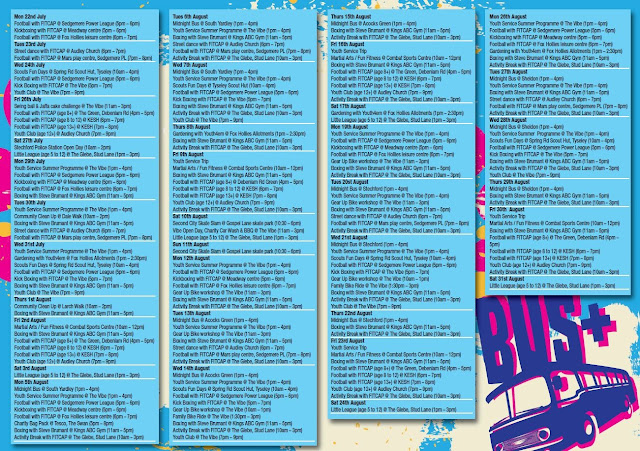 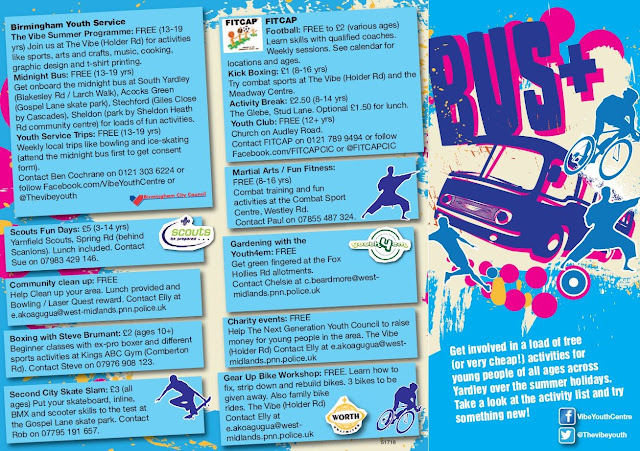 Posted by John O'Shea at 8:00 am No comments: Links to this post

Summer Play at the House of Play and Education

Another local group that has had support through the Community Chest is the House of Play and Education. They are going from strength to strength from the simplest of beginnings at the Methodist Church Hall. 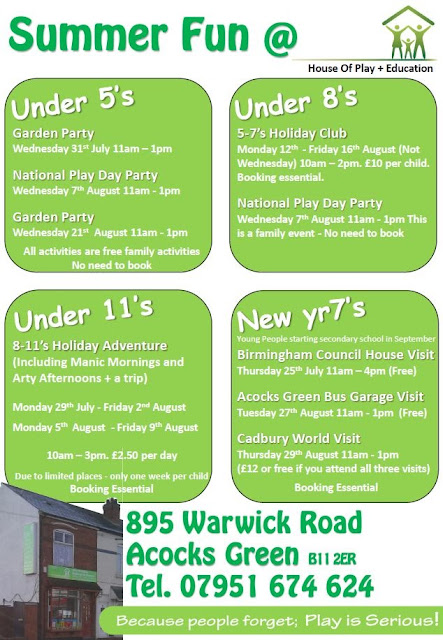 Posted by John O'Shea at 9:00 am No comments: Links to this post

Planning Applications to the 20 July 2013

A whole load of them to celebrate the start of summer.

2013/05245/PA - 41 Mayfield Road, B11 3PD
Erection of two storey side extension and change of use of single dwellinghouse into two self-contained flats.