Liberal promises have a use-by date - 12 months at the outside.

Another matter raised at last week's Ward Committee meeting was the future of Acocks Green Library - a very busy library that is at the heart of the local community. Last March, the serving Liberal Democrat councillor promised those who attended the Constituency Committee meeting that money to be spent on that library would be spent on library facilities. No equivocation. It was rumoured at the time that the Neighbourhood Office was to be relocated within the library, but this was denied.

Last week, it was confirmed that the Neighbourhood Office is to be relocated from the current site in Botteville Road and into the library. At least six desks are to be sited in the library - probably in what is currently the children's section. Clearly, this will mean additional noise, a need for privacy for the users of the neighbourhood office function and will also place additional security considerations on the rest of the library, quite apart from the disruption caused by the required modifications.

Needless to say, the opposition has already kicked off - there's even a Facebook group dedicated to the campaign with well over 100 members. That's not bad for a community in just a few days and shows the depth of anger at the decision and the feelings that they have been let down.
Posted by John O'Shea at 7:00 am No comments: Links to this post

Last Wednesday's ward committee meeting in Acocks Green was slated as a brief affair - only a single, substantive item on the agenda to pass the Community Chest funding for the year. I was running a little late and fully expected to find the meeting on the verge of breaking up when I arrived around ten past seven.

I was amazed to find that there was only one spare seat - a contingent of ladies who all attend the Fox Hollies Leisure Centre to use the pool had turned up to hector the three Liberal councillors about the closure of the small cafe at the centre. They were angry and had even provided a petition, but this was to no avail - the decision to close was already made.
The claim is that the cafe is losing £50,000 a year, but this has to be set against the fact that a number of groups and clubs that currently use the centre's facilities may decide to relocate somewhere with more attractive facilities. It was pointed out that this has already happened in at least one case. The cafe is also a community facility in its own right - providing a place for these ladies to meet after their swimming session and have a quick, warming cuppa. My comrade, Stewart Stacey, pointed out that this was rather similar to the status of the buffet cars on British Rail. The management in that industry wanted to get rid of them, because they consistently lost money, but when the cars were removed, they found that this cost more in lost ticket sales than it cost to maintain the service. It is a loss leader to encourage use of the centre - all the more important now that Sparkhill Baths are closed for the next two to three years and Fox Hollies should be well-placed to take advantage of that business.

Cllr Harmer said that there was no alternative - that the money had to be saved to allow the setting of a balanced budget (quite how the constituency will achieve that this year, given that they are well over £600,000 over budget at the end of the third quarter of 09/10, isn't clear). Perhaps if some £90,000 wasn't being spent on a former Sun hack to spin for the discredited management of the Children's department, there might be more cash to be spent. Or perhaps some of the millions spent on consultants by Birmingham City Council might have been better spent on services.

I fear that this will be death by a thousand cuts - that gradually, other items of the centre might be closed because of falling attendance, rather than attempts be made to run it properly, to advertise it and to generate business.
Posted by John O'Shea at 7:30 am No comments: Links to this post 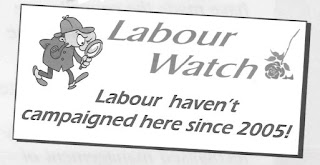 Accusing a party of telling a direct lie is not something I do easily or happily, but the Liberal Democrats in Yardley are distributing a full colour, A3 leaflet that includes a direct and demonstrable lie.

It may not mean much to them, but it is an absolute untruth to accuse the Labour Party of not campaigning in Acocks Green - for that is where this leaflet is being distributed, although I have no reason to believe that it is not being distributed elsewhere in the constituency.

We have campaigned since 2005 - I've run three campaigns myself since then. The councillor retiring in Acocks Green this year, Cllr Iain Bowen, will certainly recall the 2006 campaign when a small team helped me halve his majority. Much as I like Iain personally, we're putting up a fight to unseat him this year. We campaigned again in 2007 and 2008, campaigning also on behalf of Labour's team in the European parliament. A very successful campaign has been run to save the libraries in Yardley Constituency and we also fought to preserve the 41 bus route (John Hemming has copies of our leaflet, since he posted them on the Stirrer some weeks ago).

Sadly, we don't have the benefit of the £250k coming into the pockets of councillors, cabinet members and an MP, let alone Hemming's millions, so we have to find the money to fund our own campaigns and can't run to paid deliveries.

Perhaps the Liberal Democrats have spent too much time with their Conservative mates and are learning how to airbrush history, rather than just photographs.

Posted by John O'Shea at 12:22 am No comments: Links to this post