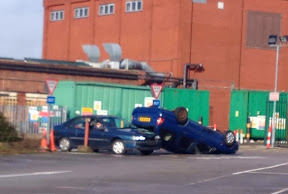 The fire crews had been called to a fire alarm at a local factory. On the way, the controller updated them that it was a chemical alarm, but on arrival they were greeted by a two car smash and four people trapped. A disgruntled employee had walked out on his job, stopping to steal some valuable and dangerous materials and open the valves on tanks storing toxic chemicals. On his way out, he had caused the accident in front of the fire crew. While the
first crew set about rescuing the trapped victims, the next to arrive at the scene had to decide whether to attempt to rescue the employee collapsed on the floor in front of one of the leaking tanks.... 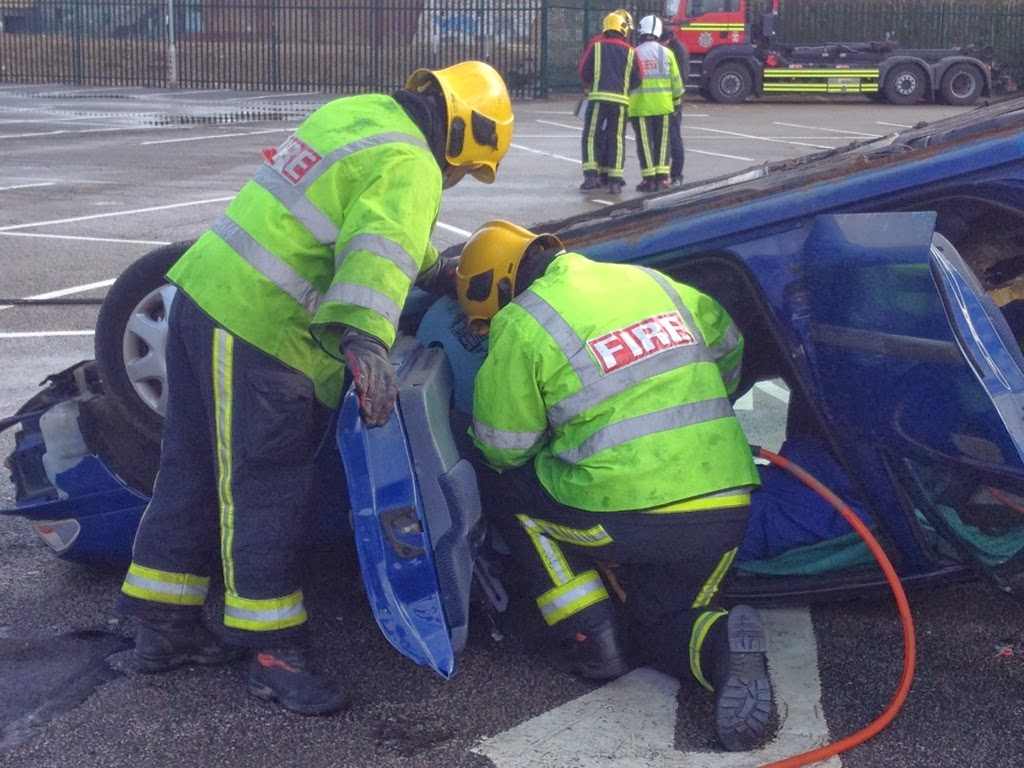 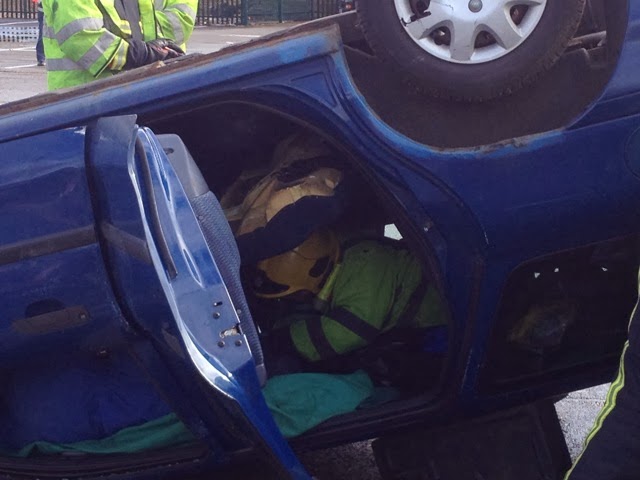 This wasn't a major incident that the local media missed, nor was it the opening scenes of Casualty, but the scenario of one of the weekend's exercises for West Midlands Fire Service. Every weekend throughout the year, the service carries out two of these large operations, deploying a dozen or more trucks to each. The crews know that it is an exercise, but they don't know the story, nor are they warned about the pitfalls that will be injected into their plans as the incident develops. All the time, they are being scrutinised by exercise staff for the way they are planning things, the care they give to casualties during rescue and how thoroughly they carry out their tasks. Even the casualties themselves are monitoring their rescuers - they come from the Casualties Union and as they have specialist training, they can report back on how their given injuries would be affected by the rescue operation. 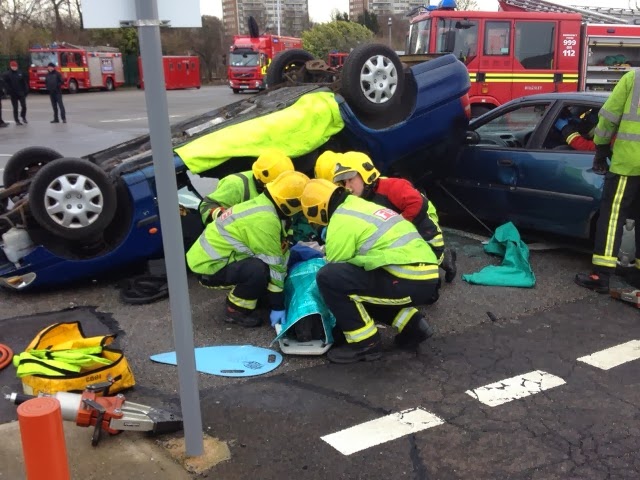 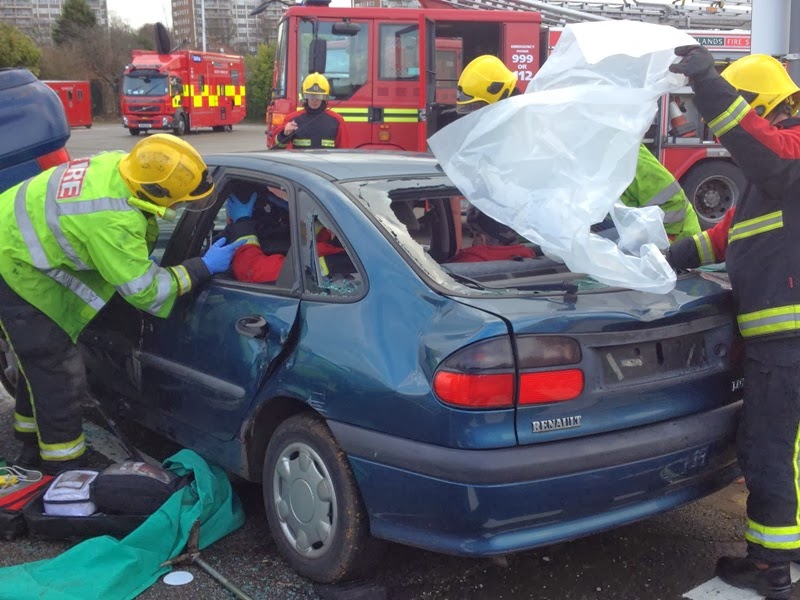 One firefighter crawls into the upturned car to comfort and support the casualty while his colleagues start dismantling parts of her wrecked car. Meanwhile, the three trapped in the other vehicle can watch as the crew work quickly to transform their saloon into a convertible. It takes about 80 minutes to complete the task, but that's a controlled extraction. The firefighter with me explains that this is Plan A. There's always a Plan B - which is used when there is an immediate threat to the casualty's life and focuses purely on getting the injured person out of the vehicle as rapidly as possible using sheer brute force. 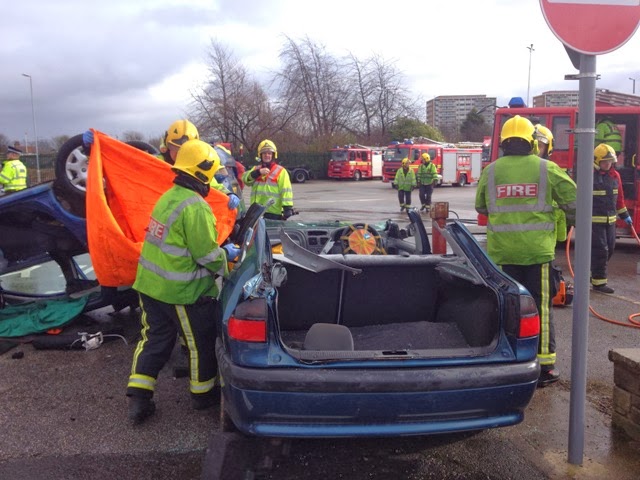 It isn't just a test for the fire crews - the health and safety managers at the factory are also testing their responses, as only their boss knows the planned details, forcing them to respond as they would in a real incident and test their processes. This is a well-run site - part of Rolls Royce - but it never hurts to test emergency procedures before anything actually happens. It also helps for the crews to see these sort of locations, just in case the call ever comes - the familiarity helps. 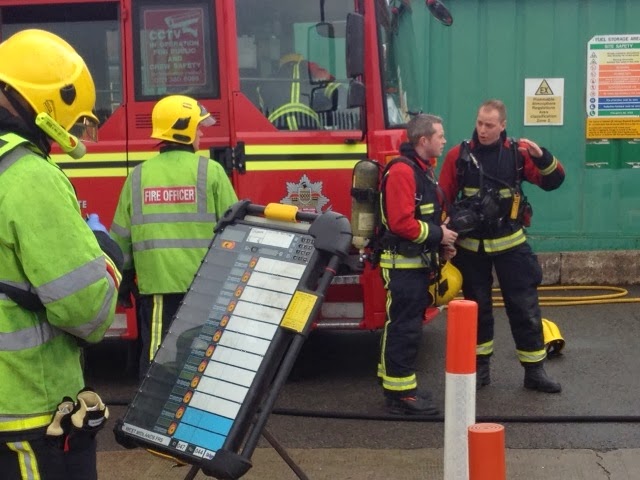 The Highgate crew turned up and they focus on the chemical risk and decide that they need to dash in to rescue the worker they can see lying on the floor close to the damaged valve.Two crew members put on their BA gear and discuss their tactics. You can see the BA control board in this picture. It identifies each firefighter in action with breathing apparatus and has a direct data connection to their tanks, monitoring the amount of air in the tank and keeping an eye on how long they have been in action. The board will also light up if one of the firefighters gets into difficulties and presses their emergency button. Although it is computerised, everything is also maintained in the old-fashioned way with marker pens - just in case the board fails. 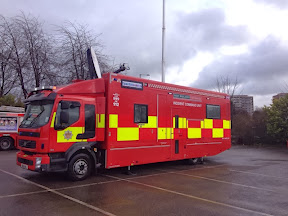 Some items of kit are propositioned ready for use - the hazardous substances container has been dropped already and the mobile command vehicle awaits the call to action as the incident escalates.

The command truck is impressive - not only for the brief respite from the bitingly cold wind and rain - but for the level of technology on board. A few years back, the command team would have relied upon paper-based records, but now the conference room on the vehicle has three large screens. One shows a map of the region with every West Midlands Fire Service vehicle marked by a moving icon, as well as giving updates on local weather conditions. Another shows a plan of the site, indicating key information like the location of hydrants and dangerous chemicals, now cluttered with icons for the vehicles deployed here. That can be essential in a major incident, as it helps the management team keep track of who is where and who is in charge of each sector. That information is also replicated on the fire engines, so when they arrive at an incident at a site identified as a risk, they have vital information at their fingertips. West Midlands have driven forward this level of technology and they reckon that they are at the cutting edge. On a mast high above the command post sits a video camera, so the commanders here can get a different view of the incident. 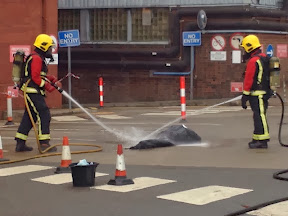 Outside, the Highgate snatch squad have returned from the chemical leak, bringing back what the exercise dictated was a victim overcome by fumes, but was actually a dummy. That had to be decontaminated and was then covered with a tarpaulin to await the ambulance crew. The site is now crowded with red - appliances are here from Canley, Bournbrook, Sheldon, Erdington and elsewhere in the city. Eight crews are at the scene now and command shifts from the first responders to the control unit, with the senior officers and their team taking over. 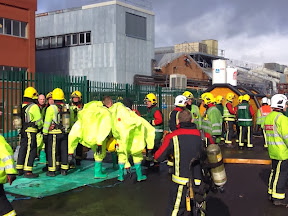 Their crews have assembled the inflatable decontamination shower unit and are now donning their green chemical protection suits to go in and deal with the problems. The CP suits with integral rubber gloves are worn over the normal uniform, helmet and breathing apparatus. One tear or rip in the suit could prove fatal, so the wearers move cautiously amongst the bits of protruding metal that seem to infest every cranny around the site. 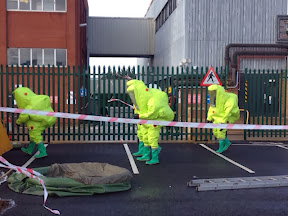 Fairly rapidly, they've got the situation under control and they return to the showers to wash any contamination from their suits and strip back down. Even here, they are being tested - the directing staff painted the valves with a gel that shows up under UV light, just to check who cleaned their gloves properly. The observers also spotted that the crews didn't seal themselves into the shower properly - better to learn that now than in a real incident. Incidentally, all the water from the shower goes into a rubber tank for later disposal - you can see it at the bottom left of the picture.

After this, there's time for a debrief. As the crews pack up, the senior officer at the incident is dragged into an impromptu press conference, where he faces tough questions from colleagues, as well as the duty emergency planning officer from the city council and me.

I have to thank Station Officer Rob Davis and his crews for inviting me and looking after me on the day. It was absolutely fascinating to watch them at work and practicing for the worst. 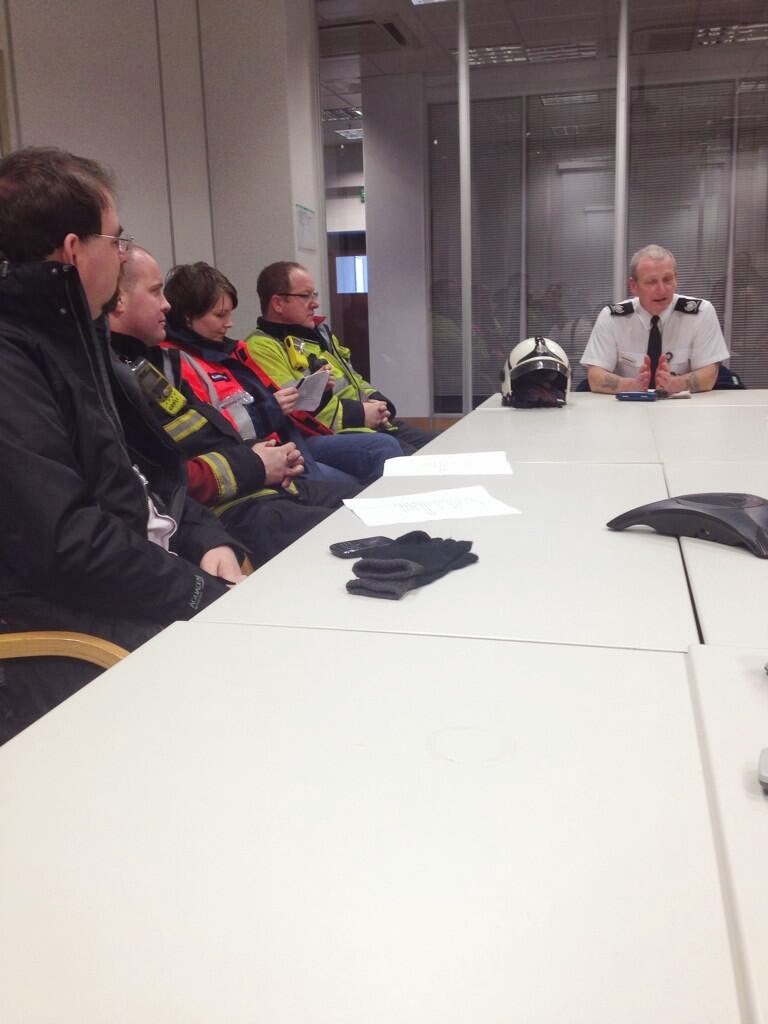 We've got a packed agenda for Wednesday's Ward Committee.
We have our Environmental Health Officer attending to give an update on her work in the ward. We'll also have a planning officer to talk about the local neighbourhood planning group and we'll be looking at current planning applications and outstanding s106 agreements.
On the table will be the proposals for Yardley District's budget cuts next year as we try to live within the slim means offered by this government. Even with the appalling cuts imposed by the Tory/LibDem coalition, Labour is still protecting the future of Fox Hollies Leisure Centre and planning a rebuild of the ageing Stechford Cascades.
While there are no plans to open a strip club in Acocks Green, we will also be looking at the Sexual Entertainment Venue Policy Review 2014 Consultation. This is likely to have most effect on the City Centre, but your views matter.
There will also be an unusual urgent item - there are some matters around the Warwick Road improvement plan that we need to discuss and on which we need your views. In particular, we need to take a view on the streetlight design, talk about car parking, tree planting and 20mph zones/limits.
If you can get along to Severne Road School for 7pm, you would be most welcome.
This is your community - join in!
Posted by John O'Shea at 6:19 pm No comments: Links to this post

Planning Applications to the 22 February 2014

After a fallow week, another three

2014/00434/PA - Land off Beeches Avenue, Yardley Road, Acocks Green
Fourteen 4-bedroomed houses
There was a 2008 application, for which permission has now lapsed, which covered a mix of 3 and 4/5 bed houses. The new application is for a more consistent house style, but slightly larger footprints.

If you have any comments, you can submit them online - feel free to pass your comments on to me.\
Posted by John O'Shea at 8:30 am No comments: Links to this post