I spent part of Wednesday evening with Team 136, who are part of the Prince's Trust scheme that operates out of Acocks Green Police station, supported by PC Stuart Toogood and PCSO Fae Palmer. They search out young people who have lost their way a little - some have records of trouble with the police, some have had problems finding work and have had their confidence knocked by repeated rejection. Many had problems at school and left with few qualifications and some have a history of substance abuse. The easy answer is to mark them down as failures or scroungers and abandon them to the system, but that's not part of the plan for the Prince's Trust, Solihull College and the police.

Last night, we heard their stories as they stood in front of an audience of friends, family, previous scheme graduates and assorted invited guests. They talked through the scheme - their recruitment, the residential team building week rock climbing, hiking, kayaking and gorge walking on the Welsh border (a free holiday if you believe the Daily Mail), their work with groups of disabled youngsters and the elderly, fund raising for their project and building a playground on Cheddar Road. After that, they prepared their CVs and had a period of work experience with a range of local employers, including Jaguar Land Rover, DHL and other companies and social enterprises.

Their stories were inspiring - the young woman who has had a string of short term jobs. She said that this scheme had "made her realise that she wasn't as useless as she thought she was." She's starting an apprenticeship next week at a social enterprise dealing with those recovering from substance abuse. Others are going through the recruitment process at JLR - which includes a drug test - and another is a groundbreaker. He had a placement at DHL and they have asked him to return as an employee - the first time that the scheme has had someone placed there, so his success will influence their decision to take on others. I had a chat with one proud dad who was delighted that his son had a job so that he could help support his own son.

This is a really effective programme that clearly has results - it gives these young people a real chance to restart their lives in employment. The fact that it works is a tribute to the Trust, West Midlands Police and the officers that run it. It was an absolute pleasure and an honour to be invited.

Planning Applications to the 14th September 2013

Nothing to report for the first week in September, but a couple for last week. Nothing controversial here.

2013/06516/PA - Acocks Green Baptist Church, Yardley Road, B27 6HG
Demolition of Glynn Edwards Hall and construction of a new two storey building to accommodate
community uses and restoration and redevelopment of Grade II Listed Church and Arthur Moore Hall
OK, maybe there is something controversial. There's one view of the proposals here - other thoughts are available. I should note that I have been formally advised of the application as a local resident close enough to be affected.

2013/06696/PA - 1285 Warwick Road, Acocks Green, B27 6PX
Application for a Lawful Development Certificate for a proposed use for the installation of a dormer window to the rear 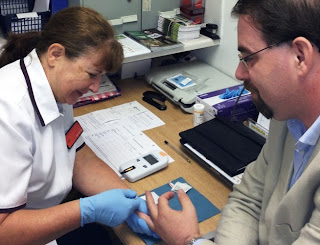 Sainsbury's Acocks Green is offering free cholesterol testing - there should be another week left of the offer. I was asked to be the guinea pig.

Despite my pathological fear of needles, I took one for the team and had one of the pharmacy team gently used a captive needle to get a blood sample which is popped into an electronic reader. The pharmacist then looks at the results and gives you some relevant advice. If they need to, they will refer you to your GP if the results show something that needs further attention.


For the record, my cholesterol was - surprisingly - within recommended limits. Thanks to Sainsburys for asking.
Posted by John O'Shea at 8:00 am No comments: Links to this post

We have a winner! 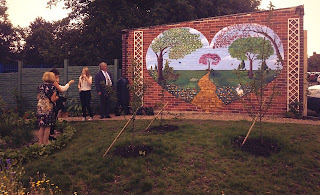 Particularly delighted to hear from Fran that Acocks Green went up a level in the Heart of England in Bloom competition. Last year, the hard work delivered bronze. This year, the team went one better and brought home a silver award, along with art awards for pupils at Acocks Green School and a special award for Fran for her hard work in energising the volunteers and local services to green up the village.

The judges were especially pleased with the mural, created by a local young artist.

Next year - can we do better?
Posted by John O'Shea at 6:00 pm No comments: Links to this post