The key speaker was from Birmingham Friends of the Earth and he spoke about their campaign to have a blanket 20mph speed limit on all residential roads in the City. This would exclude any roads classified as A or B, but would impose new limits on all others and this could be done by the City Council making a traffic order, as a number of others already have - Portsmouth being a good example of current practice, with Bristol running a trial. Even the GLA have investigated the idea for London.

I don't think anyone expects that just because the limit is reduced, that drivers will change their habits overnight, but this is more about changing mindsets over a period of time, although a report by the Transport Research Laboratory indicates that just changing the limit by itself reduces the overall average speed by around 2mph and cutting accidents by 5-10%. Adding in traffic calming measures as well cuts accidents by around 60%, but this also comes at a significant cost in street work.

There were a number of concerns raised by bus users and drivers whose business keeps them mainly on residential streets and these would need to be addressed. It was pointed out that smoother running often increases average travel speeds, even if the peak speed is reduced - the idea behind the traffic management system on the M42 is an example, where they intentionally reduce the speeds of all vehicles to stop bunching and stop/start travels. I suspect that a blanket 20mph might cause problems on bus routes, but I do think that this an idea worth considering for the vast majority of Birmingham's residential streets. We'd certainly be the biggest authority to implement this and I think that it is certainly worth further investigation.

The police were there and reported that action had been taken following a disturbance in Cypress Square back in September and that four people have been charged and bailed pending a court appearance. Sgt Mirams also explained that while they had been called to Pinfold House following reports of a break-in, as the witness couldn't confirm that the people found on the premises had actually forced entry, the incident had to be put down to trespass and the matter was closed. The police have visited the homes of the young people found on the premises as a follow-up measure. They also put out a plea for friends to join them on Facebook! A concern was raised by a member of the public about inconsiderate parking at the junction of Douglas Road and Dalston Road. They also confirmed that early next year, the police operational boundaries will be redrawn to coincide with the political ward boundaries, which will make joined-up working that much easier.
Posted by John O'Shea at 2:24 pm No comments: Links to this post

Back again for Christmas 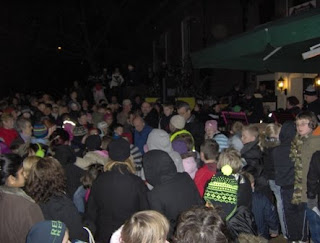 It has been a little while since I've posted (real life has got in the way), so time to resurrect the blog.
Tuesday saw the switching on of the Christmas lights in Acocks Green (not Winterval) and the event was pretty well attended, with the local schools providing an ad hoc choir and the Inn on the Green providing the venue, with financial support from dozens of local traders, organisations and Council funding as well. There was a slight delay when the magic plunger was pressed by Ray Newton, one of those local residents who has served the community in various voluntary roles for years and deserves greater recognition for his fine service, but somebody found 50p for the meter and the lights flickered into life.
Still - could have been worse. At least Martin Mullaney didn't organise it.
Posted by John O'Shea at 12:00 pm No comments: Links to this post