Unusually, this meeting was on a Saturday and was a quieter meeting than usual. PCSO John Ludford filled us on on the crime statistics and Cllr Stacey and I dealt with a number of concerns from residents.
There have been 72 incidents over past three months, slightly up on previous three months by about five offences. Results have been good, however, with thirty-three arrests made. Of the 12 assaults reported, 5 were domestic which, as a matter of service policy, led to arrests ion all occasions and others involved known offenders. Four were also arrested in relation to a single fight on Mayfield Road, which also resulted in criminal damage to property.
The figures also include 12 drive-offs from Mere Stones filling station, which is a consistent focus for this offences of theft. The site is apparently due to change ownership to Spar and may become a 24 hour operation, so we will have to see whether that change affects reported crime. This is a problem generally - across the border in Olton, a tenth of their crime during one month last year was as a result of theft of petrol. Only one theft of a motor vehicle has been reported, along with three thefts from motor vehicles, including the theft of a satnav, which fortunately led to the arrest of offender with the stolen item in their possession. Operation Repel continues to target this source of crime - plain clothes officers are keeping an eye on known offenders and uniformed officers are trying car doors, finding a surprising number of them unlocked.
Five incidents of criminal damage were reported, as well as seven cases of house burglary, of which four were just attempted. That's better than it has been for a while and better than other areas of the ward. Those attempts all shared a common method - the criminals used tools that were either lying around or were stored in insecure sheds to try to gain access to the back of the houses. They realise that their faces are known and walking down the road carrying anything remotely suspicious is likely to lead to an arrest for going equipped, so make sure that ladders and tools are always locked away out of reach. In particular, offenders seem to have targeted jewellery, which can be stuffed into pockets and easily carried away.
There were three incidents of harassment, all domestic-related, four of criminal damage to homes and one incident of a pellet gun being used to damage a window at Yarnfield School. There were incidences of robbery, including the theft of a mobile phone from a person on Mayfield Road and an attack on the Knights Road stores, which made the press as the shopkeeper fought back and the attackers escaped empty handed. Two arrests for cannabis possession, including a substantial amount at a house on Mayfield Road and a search in relation to another offence which led to the discovery of a significant quantity of class A drugs under a sofa and further charges for the offender that are likely to keep him away from that sofa for some while.

In terms of people, one PC has left to join the domestic violence team. They have been replaced, but the officer is likely to be off sick for a while. Two of our PCSOs have also moved on, but only one is being We've lost one officer to the domestic violence team, but their replacement is likely to be off sick for some while. Two PCSOs have left the team, but only one will be replaced at this stage. 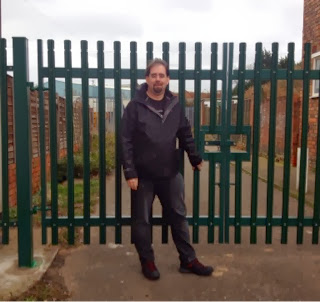 After that briefing, the floor opened to the usual range of questions - residents from Knights Road are delighted with their new security gates, which will protect the back of their properties and also that a load of dumped asbestos was removed just after the new year. We also talked through the changes to the green waste collection service, wheelie bins and speed limit changes.
Posted by John O'Shea at 7:31 pm No comments: Links to this post

Not much more to say, but as things stand, we should be reopening after a final deep clean, a couple of days to reinstall the IT hardware and then put the books back in order. It has been a long haul - although somewhat faster than the eighteen months South Yardley Library was closed a few years back.

It is really good to see the service back up and running in Acocks Green - people really value it and I'm delighted that we've given it a new lease of life.

Still plenty to do - Dagnall Road from Woodcock Lane to The Avenue.

The work is scheduled to start during the week of the 24-28 February 2014. It is expected to take up to five days and the crews will be working on site on weekdays between 8am and 6pm. Amey will put signs on the road to confirm the precise start date.


As vehicles can't drive over hot tarmac, the section of the road affected will be closed to all traffic while surfacing is being carried out.

During working hours, it will not be possible to park on the road. Cars left will have to be removed and this may incur a cost to the registered keeper. There are also likely to be speed and width restrictions while the work is carried out, as well as road closures.

Sorry for the inconvenience, but this work needs to be done and is usually completed well within the time allocated.

Posted by John O'Shea at 8:00 am No comments: Links to this post