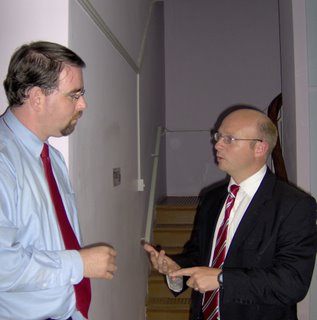 We were lucky enough to have Liam Byrne along to one of our recent meetings. I've got a lot of time for Liam - we stood together as council candidates in Yardley in 2004, but his political career has been rather more successful than mine. He was elected as MP for Hodge Hill in that autumn and won the seat with an enhanced majority last year. He's now a minister at the Home Office - one of the political hot seats with public focus on immigration and crime, but he's also a decent bloke. At an earlier meeting, Liam brought his kids along and they were (generally) well-behaved as he spoke to us about the health issues that were then part of his brief. He's also a cracking local MP, always ready to stand up for his electorate over issues like the Tesco development set to be built on playing fields in his constituency.
He took questions on a range of issues, including identity cards and immigration and even gave me a few minutes of his time afterwards to chat about campaigning.
A decent bloke and definitely one with a place reserved at the Cabinet table. Me? I'll settle for a seat on those benches in the Council House.
Posted by John O'Shea at 10:54 pm No comments: Links to this post