When I was elected in May and Stewart and I became the Labour majority on the Ward Committee, we were delighted to see that repairs were planned to the leaky roof of our library, long neglected. What shocked us was that no plans had been put in place for alternative facilities while the library was closed - a period of some twelve weeks.

Given that this is one of the most popular libraries in the city and at the heart of our community, we didn't think that this was satisfactory. It doesn't just offer books, it provides a home for the neighbourhood office and crucial access to IT. Yardley has a real problem with a growing digital divide - the uptake of internet access is behind the curve here, so we need the facilities that the library can offer. Under the Lib Dems, Sutton Coldfield and South Yardley library were left closed for months with no alternative facilities other than the nearest library. Stewart and I didn't think that was good enough, so over the past few months, we've been working hard on a temporary alternative site and working through a number of options, negotiating with suppliers and potential landlords to drive a hard bargain with our limited funds.

Once we've finalised the details, we'll be able to announce more, but it is planned to be very close to the library. It won't offer the full range of services that the current building does, but it will offer a limited book borrowing service and also access to IT. The rooms used are accessible for all and should allow a good service to be maintained.

Just another example of how Labour are determined to be different and determined to deliver.
Posted by John O'Shea at 8:30 am 1 comment: Links to this post 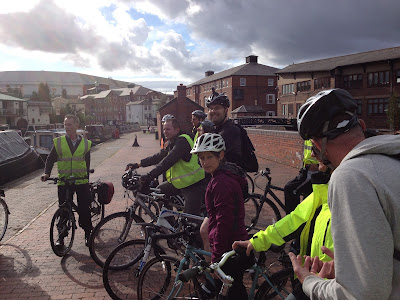 Last Friday, a group of councillors joined a team of committed cyclists to have a ride around Birmingham (about 4 miles in total) to see how difficult it is to get around the city by bike. We only rode around the City Centre, but it was genuinely instructive. You can see more pictures here and here on Brownhills Bob's page, who ran across us by chance on Moor Street - a particular disaster area. I can't claim to be anything other than a leisure cyclist and occasional commuter.

While it was an all-party ride, the only non-Labour councillor was Dave Radcliffe, a Lib Dem. We were joined by cabinet members Steve Bedser and James McKay, scrutiny chairs Victoria Quinn and Lisa Trickett and fellow backbencher, Peter Griffiths. Very disappointing not to see any Tories there, but given the state of the roads, that's probably more out of embarrassment than anything else (although a couple did give their apologies...)

We saw some areas where cycling has been thought about, with on-street cycle lanes and reverse flow lanes against one-way traffic, but too many where it has been forgotten - or might yet be forgotten. The Hill Street/Hurst Street cycle lane is very heavily used, but we aren't clear what the future is when the New Street main entrance is relocated. Moor Street is a nightmare for two-wheeled travellers - millions have been spent on the highway, with no consideration at all for cyclists. I found that out when I came to cross it later that afternoon on the way home - navigating the traffic was a nightmare.

Acocks Green isn't well served in terms of great cycling routes to the City - we don't have the Rea Valley route that runs in from the south of the city and the canals aren't suitable for any serious numbers of cyclists. We have an opportunity with the Smarter Route scheme which will be coming to the Warwick Road over the next few years and I'll be making it my mission to get a good deal for all road users - pedestrians, cyclists, public transport and drivers.

Cycling is coming up at a forthcoming scrutiny committee meeting. So, I'd welcome your thoughts on it. :Looking to the future, how can we make Birmingham a cycling city? Do we surrender to the car or push on with making our roads safer? (I think we should encourage cycling for the health and environmental benefits, but I'd be happy to hear alternative arguments too) What would make you want to cycle or cycle more? Do we need more cycle routes? Better signage? Driver & cyclist education?

This link was sent to me and it does seem a pretty sound starting point.

Here are the core questions that we are considering

1. How can we encourage cycling in the city that is efficient and safe, getting people from A to B desirably and sustainably linking urban areas?
2. How can natural green corridors and walkways alongside road networks be best used to create a city cycle and/or pedestrian network? How has this been developed in other cities?
3. What are the resource implications of adapting current cycle routes and joining them up?
4. Which partners can help us to do this and what resources do we need?
5. Who is currently cycling? Who could be most easily encouraged into cycling? What are the barriers and opportunities to uptake by more people and between more places?

If you would like to comment directly, you can send your views to Baseema Begum in the Scrutiny Office at Birmingham City Council by phone on 0121 303 1668 or by email to baseema.begum@birmingham.gov.uk by the 5th October (or to me, if you want). There will be a public evidence gathering session 1300-1500 Friday 19th October in the Council House.
Posted by John O'Shea at 8:00 am 1 comment: Links to this post