Although I could only make the last 45 minutes of the meeting last night, it is clear that there remains a gulf between the Stockfield Community Association and some other parts of the community. The SCA/Yardley Baptists have put their case in a meeting and will put it again on Wednesday at the Ward Committee at Acocks Green Library - I'd urge those for, against and those undecided to attend and listen to the arguments.

The architects did publicly say that they are open to discussing the detail of the application and making changes - I've undertaken to ensure that they are able to meet with the planning officers to discuss it - but they are firm in the need to demolish and replace the hall as the third phase in a series of works that will revive the semi-derelict Arthur Moore Hall behind it and see work done on the main body of the church. As ecclesiastical exemption applies to both of those parts, they are outside the local authority remit.

We have three broad camps - those in favour of demolition and rebuild as per the current plans, those who oppose demolition and would only accept reconstruction and repair and those who reluctantly accept the need to replace the hall, but have problems with the current designs. That oversimplifies the range of opinion quite massively, but I suspect it covers most people!

I would like to see exactly what the architects are prepared to offer in terms of changes, but they weren't forthcoming on that. They did reveal that there is an alternative plan which sees the black slate monolith clad in clay tiles instead, which might provide a more aesthetically pleasing look, but I'd particularly like to see the asymmetrical roof line changed to be more in keeping with the other roof lines along that stretch, particularly as it is at the outer edge of the proposed conservation area and there is room for the design to better echo and complement surrounding buildings without becoming a pastiche.

My key point was that when the architects have packed up their drawing desks and gone home, it will be those of us who have to live by this building that will have to take the consequences and I want it to continue to be something that we welcome in the area, not an eyesore. While I'm very sensitive to the need to conserve the built environment - I've supported the conservation area for years and am at the forefront of the campaign to preserve the police station - we also need to provide for the needs of the community. Reconciling those two aspects remains a huge challenge.
Posted by John O'Shea at 1:00 pm 1 comment: Links to this post 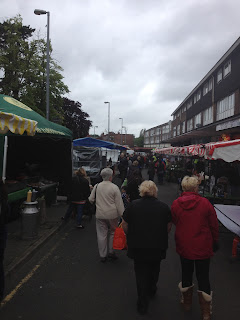 Pictures from the last one - on a less than sunny day. This Saturday looks to be rather brighter and warmer, so there's no excuse not to pop down and sample the range of produce on offer.

9am - 3pm on the slip road directly opposite Holy Souls Church on the Warwick Road.

Despite the headlines showing some improvement in the unemployment figures, there's still a lot of devils hiding in the detail. Birmingham has a small increase in JSA claimants year on year, up 0.2%. While that is statistically insignificant, that still means that 179 more men and 1402 more women are out of work than in June 2012 - a fact that is very significant to those people and their families. In Yardley, the overall figure was up by 0.2%, with an increase in women's unemployment of 0.5% set against a drop in male unemployment of 0.2% - that's a net 108 more people out of work in our constituency.

Nationally, it is worth noting that the figures also show a year on year drop of 120,000 in the number of full time employees, continuing the trend towards part time work. At the same time, the number of self-employed people rose by 132,000, accounting for a decent chunk of the change.

These figures are hardly a measure of confidence and - much like the other economic indicators - show no signs of a sustained recovery. With more bad news expected next week with the growth figures likely to show a continued recession, we're still bouncing along the bottom - pretty much as I predicted, sadly.
Posted by John O'Shea at 3:00 pm No comments: Links to this post

This is probably the biggest planning issue in the ward at the moment and I'm keen that all sides of the argument get to discuss it as fully as possible. Accordingly, I've asked the Stockfield Community Association and others on that side of the issue to attend the next Ward Committee meeting on Wednesday 25 July at Acocks Green Library.

Acocks Green Focus Group have strong views on the matter, but I do think that Stockfield Community Association and the Baptist Church need to put their views in a public forum and I've confirmed that they will be attending. They are also organising a public meeting this Friday - the 20th July - at 7pm in the Glynn Edwards Hall and all are welcome to hear from the Association and the architects.

For those of you not up to speed on this, the SCA and the Yardley Baptist Church have submitted joint plans to demolish the locally listed Glynn Edwards Hall on the corner of Yardley Road and Alexander Road and build a new building adjoining the church, the use of which would allow them to fund repairs to the other statutorily listed buildings on the site. There is vocal opposition to this proposal, but there is also a considerable chunk of local support.

Local listing is a way for the community to mark out buildings with historic significance, but it does not carry the same weight as the statutory listing grades.

If you want to review the current plans, you can find details here.

As always - your thoughts are welcomed.

UPDATE: Also worth a look is the Acocks Green Neighbourhood Forum website, where the last meeting showed opposition to the demolition plans.