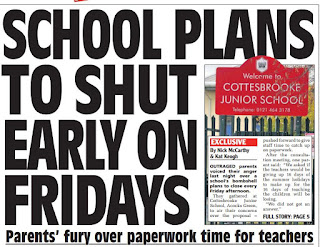 You may have seen this story on the front page of the Birmingham Mail today - on BBC WM's Adrian Goldberg show this morning, the Drivetime show this afternoon and BBC Midlands Today this evening.

The school have refused to comment to the media and this has meant that there's a lot of disinformation flying around. I'll try to clear that up with some facts, but I should be clear that I'm supporting the majority view of the parents at this stage, but I will try to put the school's case as I remember it.

The school is proposing to change their opening hours every Friday to close at 1pm, rather than the usual 3:20pm, starting as usual at 8:50. This is being consulted upon by the governing body with a view to the new hours starting in January. The school proposes to run a number of free after school clubs on the Friday afternoon to help those parents who are unable to collect their children at this time and they have suggested criteria for accessing this facility.

The reason is that the school believe that this will make it easier to deliver PPA time for their staff. This is a legal requirement to allow teachers to carry out planning, preparation and assessment work and has been part of the education landscape for a few years now. It isn't, despite the shorthand used by some parts of the media, a chance for teachers to "catch up on paperwork" as if they are lazing around in the staff room. It is vital to the provision of good education. Schools provide that time away from the classroom through a number of methods - some employ a floating teacher to cover classes in turn, others use supply staff and some bring in external companies to deliver PE or other activities.

Last night, there was a very well-attended meeting of parents, with about 100 people present. I attended, after a number of constituents had approached me with their concerns about it and I was struck by the dedication of those parents to the education of their children - their knowledge and their passion was impressive. There was only one parent there who spoke up in favour of the proposal - the vast majority of them were utterly opposed to the idea. 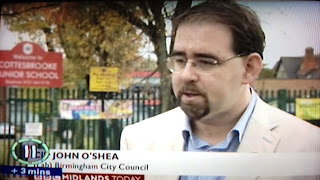 A minor issue raised was the inconvenience of picking up their children at 1pm and working that time around jobs and collecting children from other schools, including Cottesbrook Infants across the road. For most parents, the main concern was that their pupils would be losing teaching hours. Over the course of a month, this comes close to a whole school day lost.When schools are focussed on attendance, this seems to send the wrong message to pupils and parents about the value of school time.

The school claim that other schools adjudged excellent by OFSTED operate similar hours. One example cited was Ninestiles Academy, which does close at 2:15 on alternate Fridays, but the lost hours are made up across the remainder of the week - not something part of this proposal. In any case, merely saying that other excellent schools do this does not establish that this change actually brings excellence - I'd like some evidence to support this.

Additionally, the school says that this means that the classes will have their usual class teacher with them for all the teaching week, rather than only part of it, citing the variable quality and sheer cost (over £60k) of supply teachers as an issue. The cost is a fair comment, but other schools do manage to deliver PPA time without this change. Further, they will still not have their class teacher - or any teacher - with them on Friday afternoons, whether they are at home or in school.

I also have concerns about the after school clubs on Friday afternoons. They will be prioritised for those pupils whose parents are either in work or education, alongside pupils with special educational needs. What worries me is that pupils with unemployed parents could be excluded from these clubs and that also sends the wrong message about the value of people.

This is all possible because last year, Michael Gove, in his infinite wisdom, gave schools the power to change the length of the school day, removed legal minima on the number of hours to be taught each week and also removed the regulations about consultation. The school governing body can take the decision and do not need to even consult the local authority. Gove did not remove the statutory requirement for schools top open for 380 half day sessions per year - usually delivered across the 190 days that most schools are open and at first sight, this scheme appears to reduce that number of sessions down to 357 this year and 342 in subsequent years. Some parents are certainly concerned that this may actually be unlawful as proposed - that's a key question that the school need to answer.

I can't stress enough - I absolutely support the aim of this school to deliver first-class education to their pupils, but I do not believe that this is the right route and nor do the parents to whom I have spoken, people who just want the best for their children.

What do you think? Are the parents wrong? Does this work elsewhere?

Cottesbrook Infants (where I am a governor) has no plans to consider changing their hours to match.
Posted by John O'Shea at 7:30 pm 3 comments: Links to this post

Just a reminder to all those keen garden waste recyclers - the last green waste collections of the season will be made on your usual fortnightly cycle between the 26th November and 7 December.

They will restart on the cycle beginning the 25th February 2013.
Posted by John O'Shea at 6:00 pm No comments: Links to this post

Just a couple of applications this week:

If you have any comments, you can submit them online - feel free to pass your comments on to me.
Posted by John O'Shea at 6:00 pm No comments: Links to this post

A belated report back, I'm afraid. Our first meeting in the Council House, in the Chamber - moved at quite short notice in time and space. This perhaps didn't help with the number of members of the public attending - which I think amounted to four (although from memory, I'm not sure they could be called civilians). From next time, we should also have live web streaming available to spread visibility (perhaps we should allow interaction by Twitter....)

The minutes are now available on the Council website. To be honest, this meeting was still about setting up the parameters for the operation of the new district structure. In particular, the performance monitoring framework is still being established and we'll start to see that bear fruit over the coming months, along with an increased district focus on housing. It was noted that we don't need a complex report - essentially we should move to a system of reporting by exception, so we should expect detail on areas that are not achieving against agreed targets. We've also got the ongoing consultation into the future model for tenant involvement in neighbourhood management.

We're now also getting much more up to date financial data - no longer will it be three months behind reality, the aim is to provide it up to the end of the last month (not even quarter). Also, we've now got the financial 'savings' allocated out to each service area, rather than being grouped under a single, rather incomprehensible heading. We're still facing significant 'pressures' in this year, largely down to delays in introducing new operating models for various services, which have been the subject of 'Rapid Service Reviews' that have thus far proved to be as rapid as a dead snail nailed to the floor.

The other key issue raised was the District Convention, to which key stakeholders across Yardley will be invited, on the 10 November 2012 at South Yardley Library. This will review performance and then help create a direction for the future of the district.
Posted by John O'Shea at 8:30 am No comments: Links to this post